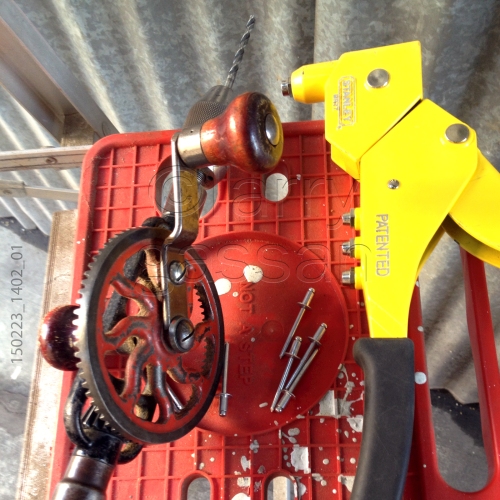 A problem had me vexed. It looked like a glass wall, and I wasn’t having any fun with it.

Another problem needed my attention—a section of corrugated on my storage unit had lost its original self-tapping metal screw, and was flapping. I corralled my pop-rivet gun, hand drill, and went over to look at.

The first drill-bit snapped on the first hole. I replaced, and paid better attention to the problem. Better luck—made the next two holes through two sheets of corrugated metal siding. Yes, its a funky setup, but the price is right.

Setting the pop-rivet was delayed while I steamed in circles switching out the heads. I was chewing it up with pliers, until I saw the hex-wrench tucked into the handle of the gun. That alone would’ve saved 15 minutes, but I haven’t worked with this tool in several years. Forgetting is like that.

In the process I became reacquainted with some facts.

The antique hand-drill. Originally made by Miller’s Falls in western Massachusetts, probably dates from the 1920s or earlier. Nickel-steel works, tropical hardwood handle with a screw-cap that you can store drill bits in. A true cordless. Picked it up at the Long Beach swap-meet back in the early 1990s, when all the ex-McDonnell-Douglas machinists were selling out their garage tools.

The pop-rivet gun was from 2009. Bought the high-dollar gun with the flexible head, and a bucket of various sizes and gauges. Of course I used the biggest, scarcest ones in stock.