Post-Modern Art Blows, And It Blows For You

Left-Overture: Pictures At An Exhibition

Post-Modern art sucks. You’ve seen the same tired, date-expired MFA thesis shows. The Cream-of-Wheat blur of anemic white-boy poser product in galleries. You’ve wondered “…why does this suck so badly?” You also may have asked “why are critics jacking on this so hard?”

There’s no there, there. How else can you explain a guy who swiped Hanna-Barbera cartoon characters (original intellectual property), enlarged them, painted them on 1/8″ masonite, silhouetted them, and then sold them for $16,000. Now that’s a hustle.

Post-modern art is less honest and more whorish than every big-screen TV ad you’ve ever endured. I’ll venture that the TV ads are more honest. Its that bad. Let’s take a look at the moving parts that comprise this Unholy Beast.

The following elements are essential to truly succeed in Post-Modern Art:

Post-Modern Art Perpetrators are drawn from a select candidate pool. Admission is based on a system of overt coding, class and strata delineations, which are underwritten by formal and unwritten protocols, shared educational and leisure pursuits, secret handshakes, etc.

Here is a general diagram: 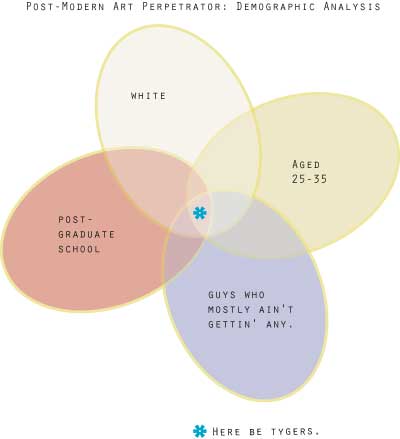 Women are also represented in this debacle. Read on.

Concept Art & “Installations”: The Overview in the Culture

When Concept Art came into full flower in the mid ’70s, its cheesy shallowness and thievish ways were admired by those who imagined that poison oak was a decorative plant.

In the 1980’s this further “developed” when practitioners like Karen Finley did some memorable public performances involving crushed yams and her butt.

What infuriated many people was that she was doing this while getting NEA grants.

With arts funding in public schools being strangled (to the delight of neo-con Bolsheviks like Grover Norquist and his fellow travellers), this was the final straw for deep thinkers in the Republican Party like Jesse Helms. He was a moss-backed, regressive dinosaur, who only needed to utter one word on the subject of funding. That word was NO.

How many programs died that year, never to return?

Back to the Big Show

Concept Art and Installations are Pentecostal in that you get to wallow, jabber, and believe it matters. it’s ecstatic for the participant, and meaningless to the critical observer. This is a “faith-based” expression for the under-tasked and overeducated who wouldn’t be caught dead in the Bible Belt, on a two-lane highway on Sunday, in somebody else’s SAAB, with whining, atonal indie-pop on the iPod.

Concept Art plays to weakness, not to strength. Installations are the weakest of them all; the sickly calf that the wolf has already decided to cull from the herd. Too bad there aren’t more wolves, the calves are oversized, tottering, and begging to be eaten.

Briefly: what you think something is, is. Like Cindy Sherman, endlessly photographing herself in various costumery and drag.

I tried to explain Cindy Sherman as Charlie Chan to a Japanese woman in 1987 at the MOCA Temporary Contemporary here in Los Angeles. It was hopeless, as Sherman’s work is a series of cultural references and sequential left turns. It didn’t make a lick of sense. Unless you’d watched a lifetime of American television.

And what exactly is this uh…magnificent…thing?

The list goes on for quite a bit. We’ve only had thirty years to get up a head of steam on this.

Here’s another good example: Damien Hirst’s “Paracetamol”. The bad news: a complete re-rendering of a generic British pharma label. The good news: He sold it to Marc Jacobs.

For a visual refutation of the Post-Modern Art operating code, I present “Madame X” by John Singer Sargent.

This is not the only example—there are many, not limited to painting either. It just happened that I saw this masterpiece on the heels of looking at a lot of weak PoMo crap over a long Xmas vacation. Best thing that happened in a long time.

Here’s what makes this work magnificent.

OK, so that example is so 19th century. Who has game in the late 20th-early 21st centuries?

Yes, this stack is heavily photographic. It’s not exclusive or definitive—just convenient reference points for viewpoints that are completely opposite the working plan of the Post-Modern Perpetrators.

When I was in design school I spent a lot of time in the stacks, researching. Sooner or later, you go cross-eyed and I got up and wandered around. One day I pulled the “Proceedings of the Korean Worker’s Party Plenum: Pyongyang, 1972” off the shelf. I started reading it. It was an impenetrable jig-saw puzzle of interlocking code-words, jargon, and heirophantic reference points. Just like “Art In America”. The only difference between the two was that “Art In America” was printed on heavy glossy paper, and had full-color pictures.

Now it all made sense. Both documents were designed to repel the outsider, baffle the scrutinizer, and reward the insider. The insiders in Art In America are the gallery owners. Their job is to shape the market by controlling the flow of product [bait] to the prospective patrons [fish].

There is nothing new in this. It is the eternal rhythm and cycle of perhaps the world’s third oldest profession. But it is new and evergreen every morning. Like true love, it has to be continually rediscovered. So perhaps you can now look at this squirrely mess for what it is, and decide if you need to accept it on the terms that its being presented to you.

ArtSpeak is found in various places [print, gallery walls, etc]. It is best read aloud in one of two voices: (old-school) Daffy Duck/Sylvester the Cat; or New Jack (Eric Cartman). Either of these voices are highly effective Bullshit Detectors. Watch jargon, Latinates, and situational boilerplate melt away like a fumbled sno-cone on a summer day.

Accidents That Should Happen

If a toy piano fell out of a ten-story window and hit Chris Burden in the head, and hopefully killed him, would this be a worthy performance piece? The short answer is yes, it cannot happen soon enough. Unfortunately, there are many other deserving recipients, and not enough toy pianos. This would be Retail Darwinism, where wholesale solutions are called for.

“The Poseidon Adventure” is a convenient model. “Airport” is another. And since Post-Modern Art is the target, let’s go with Airport. The goal is to fill up a 747, or an Airbus 320—doesn’t matter which. I’m sure you’ll have some Deserving Candidates. Email me.

Leading the pack, in the Ambassador Lounge:

…you get the idea.

The jet fills up. Then it takes off. Somewhere over the Atlantic, shit happens. There is on-board drama and pathos. It disappears off the radar. Fox and CNN scramble to find Art Experts in their Golden Rolodexes to Explain It All. If there are a few accidental blondes on board, all the better.

Cut away to footage of search parties combing the ocean for remains. The gallery owners and other syndicate fixers are privately elated and panicked—their product suppliers have vanished. Fortunes collapse or expand overnight.

The bad news is that this art form is an easy expression of the culture we live in. In case you have any doubts, rent “Idiocracy”. In the larger culture, “American Idol” is in it’s 6th season, celebrating inept mediocrity (as if there was an adept form). The necessary prophylaxis to “Idol” can be found here. Miss Teen South Carolina shared her knowledge of world geography with the world here. And John McCain is confused about who’s doing what in Iraq, nothing a few JDAMs wouldn’t fix. Let Gawd sort ’em out.

In the final opinionated analysis, I think that these offenders are deeply afraid of their own shadows, and their own hearts. I’ll go further and posit that most of them are terrified of growing up and becoming mature adults.

Its a good thing that firemen and EMTs aren’t cut from the same cloth.