Extracting assumptions and trivia from this video…

4/ Number of text messages? How many actually say something? LOL/STFU. Highlights the metrics of availability and theoretical cost of use.

6/ All these networks, infrastructures, systems are kept alive by electricity. When the lights go out, party’s over.

The “Plan B” Photo Shoot Weekend

I was on location at the finish line of the Western States 100 Mile Endurance Run. The winner was due in about an hour.

I was setting up my lights—A Norman 2000 power pack, 2 lamp heads, one with softbox, the other with translucent umbrella. I was taking preliminary flash readings when I heard a loud cracking sound from the powerpack, followed by a slow puff of smoke. I toggled the switches, hoping that I had been hallucinating. The test switch was inoperative. I had a dead power-pack.

I could’ve been totally screwed. However—I’d packed my Lighting Plan B: 2 Vivitar 283s, 2 285s, a radio slave, and some Wein Peanuts. Incidentally, the case was a dumpster salvage from Art Center, thanks to my friend Lars who is the Shop Supervisor at the Lida St campus. 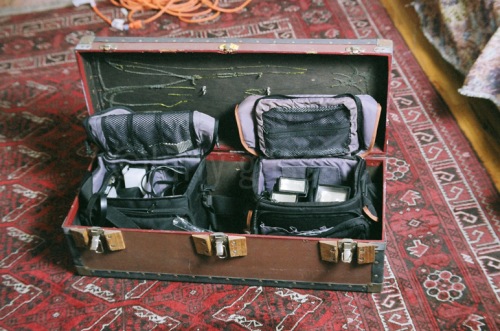 I quickly took new readings. The winner arrives. I make my shots, and await the next runners.

Over the next 12 hours I photograph another 40 runners. Not every finisher makes it to the studio—they’re wasted, distracted, otherwise not interested. No matter, its not a mandatory. 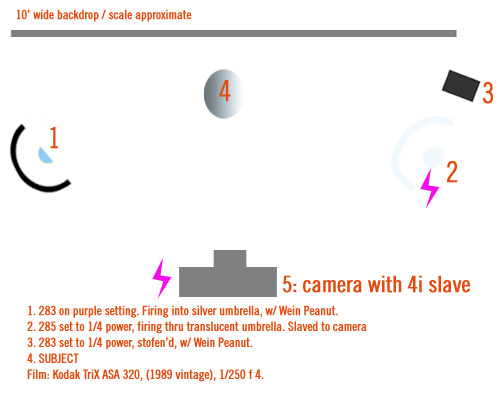 So far, so good. Until about 0945 on Sunday. The 80mm lens on the Hassy decided it’s had enough. The Plan B Camera is pulled from the green room—the Yashicamat 124.

Plan B camera and strobist flash units, inside vintage case.

I shot the remaining roll of Kodak 160 in it, then switch off to Kodak ASA 400 TCN. Keep shooting.

Now comes the fun part: had I learned anything in the last 6 months, and more importantly, did I remember when I needed it?

I’d heard about using small strobes for big jobs. To tell the truth, I didn’t quite believe it. Looking back I needed to have big lights dump light to overcome a tendency to underexpose.

Realizing I needed more information, I’d started to read the Strobist.com back in December ’08, as these guys are all about creative solutions with small strobes.

Over the years I’d collected a stable of Vivitar 283s and 285s. No, I couldn’t afford Nikon Speedlights, and yes, I’m a primitivist. These Vivitars are the AK-47s of flash—sturdy warhorses that dump an unholy amount of light. Even dialed down to 1/4 power, they make a lot of magic, and go all night.

When I got the film back, I saw that overall reduced light at night gave me rich shadow and modeling. As the sun came up behind the light-proofed backdrop, the same settings opened up deep shadows in the faces, and left enough modelling so there was dimensionality. By 11:00, the official end of the race, the sun was nearly overhead to give that special “hair-light” effect. 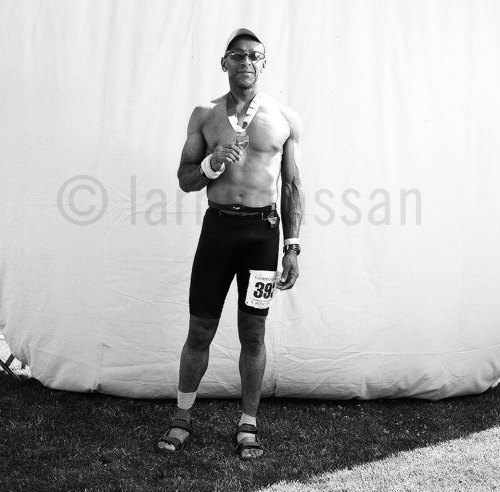 With less than 30min before the official close of the race, the sun is high in the sky, and strobes open up the shadow areas.

A major added benefit of smaller strobes: a lot less weight in travel, quicker setups and knockdowns, and the versatility of photo-guerilla shooting. I’m a way happier camper now. 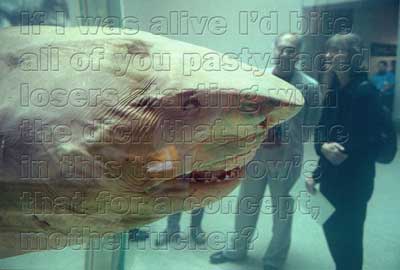 Mr Shark has his own thoughts on the subject of art.

I’m delighted to assure you that bullshit knows no boundaries or statute of limitations. The New Yorker had a lengthy article on “the Art Doctor”,  conservator Christian Scheidemann. I respect Mr Scheidemnan’s encyclopedic expertise. What I find thoroughly laughable is his considerable talents are keeping art swindles by the likes of Damien Hirst et al, on life support.

Exceptions to the sorrow were some droll moments where beetles were gnawing the guts of a Wilfredo Lam canvas because they liked the glue. Wilfredo could kick the asses of all the current Po-Mo darlings, and then entertain their mistresses in style.

So, I decided to fire off a letter, to hurl a dead cow over the parapets if you will:

Did it occur to anybody else while reading “The Art Doctor” that the real task was conservation of a preposterous fraud? Every “artist” reverentially mentioned is a slick bullshit artist, a mountebank, a swindler and cheat; pimply adolescent trolls stumbling in the footsteps of giants. I can’t wait for all of their “works” to implode due to their moronic ineptitude.

There was no thud, but it felt good anyway.

If You Think This Ad Is Bogus… 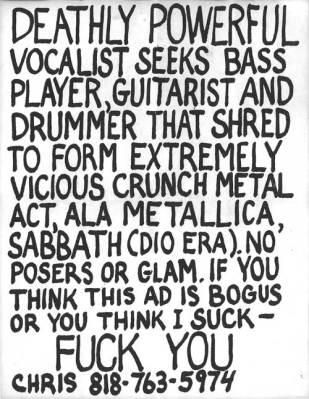 I pulled the original from a plywood board-up on Melrose Ave. here in LA in 1989. It was an instant classic.

Over the years I’ve had it in the various offices I’ve occupied. Mainly its been enjoyed. One middle-manager stuffed-shirt at Grey Advertising huffily insisted I take it down, as The Client was going to be in the Office on a Tour.

Right. I made a note to Min-Wax the oar I was seated at.

The best reaction was from a cool account-trainee who looked at it, and told me that a friend of his had made t-shirts using the exact same art. And that this was the first time he’d seen it anywhere else.

Chris, wherever you are, you’ve brought seconds of pleasure to countless ad professionals.