I got a weed-card for my elderly mother who is suffering a marked loss of appetite because of her heart and lung problems. The depths and length of her pain overcame her deep resistance to marijuana—my now-deceased younger brother had his own deep problems with weed, but had sobered up and been clean for 30+ years before his sudden death.

Earlier this summer we’d joined thousands of other Californians in the Kabuki shadow-puppet approval process. We got the weed-cards, and went to the dispensary. After a friendly consultation, we came home with edibles, sub-lingual drops, and paper slips. Smoking was out of the question, because her lungs are shot from when she smoked as a girl of 12 through her early forties.

The first forays were darkly comical. She’d noshed 20g of a 70g bar, thinking the dispensary dude was exaggerating about its effects. After I sternly warned her that even though the dispensary walls had murals of tigers, Buddha, and were purple, that this was Serious Meds, like the kind she gets from Rite Aid. OK then.

She was wobbly on her pins, but mentioned that the Two-Buck Chuck tasted sweet. This was news, as her taste-buds are blown out.

All this came up in an unrelated conversation with Ophelia Chong of Stock Pot Images; whom I’d worked with at the Workbook from 2004-2005. We were comparing notes on elder parents, and she suggested taking some photos next time I visited.

I did after bringing it up to my mom. She was amenable. I set up the shoot in her dining room, talking her through it. I kept photo gear to a minimum, focused on her hands, as she has a visceral reaction to cameras. Like blinking, moving, and so on. Made the shots, and sent them to Ophelia for approval.

To my delight, my images met Ophelia’s approval. I made an additional portrait of my mom, and kept the elapsed time very brief. She has little strength to sit up because it hurts. She was very patient with her son, and we made it happen. 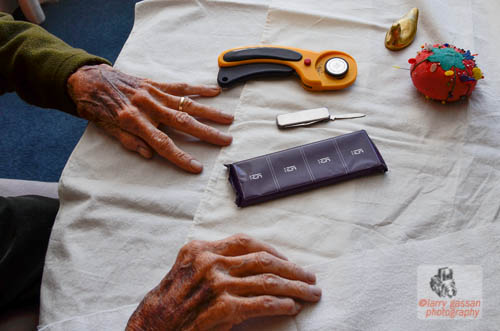 Setting up the story: test-shoot for Stock Pot Images.